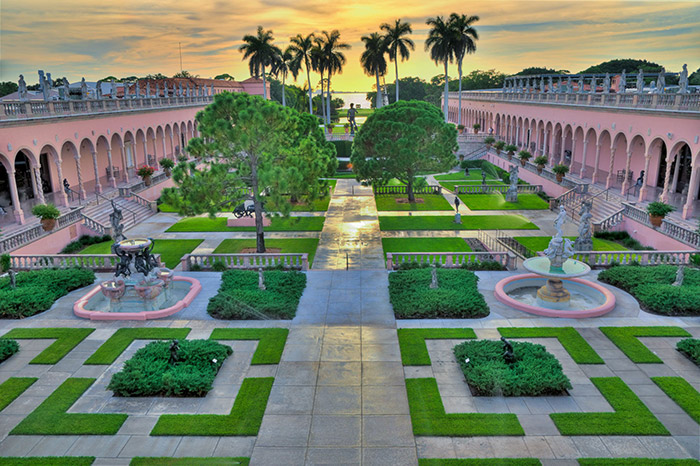 The Garden in Your Brain

Have you ever just sat in silence? The kind that sends a chill down your vertebrae, that washes over you with a familiar embrace. Of what it once was like, before the world got its hands on you. Before the weeds took root.

It’s the kind of silence that makes the rhythm of your heartbeat synchronize with the stillness of the space. As leaves, branches and trees reach to receive the radiant rays beaming, and bathing the garden in golden sunlight.

The electric chartreuse hedges house bronze statuettes of animals and mythical depictions of man, that marvel at the marble pathway, like a divine processional. The art museum stretches its arms around this cosmic courtyard with a warm maternal embrace. This is the sculpture garden at The Ringling.

A serene, and often, serendipitous personal escape that regally resides on the Sarasota bayfront.

An oasis free of steel, barbells, and clamoring of weights; an understandably strange place for a human like me to find solace. My first time here was for an Art History paper in college.

“Trev, I’ll be no more than an hour or so. Just need to find a painting to write about… be home soon…” Well, 6.5 hours and two weepy eyes later, The Ringling had captured my heart in all her harmoniously historic glory.

Needless to say, it was the easiest paper I’d ever written.

When standing on the steps of the sculpture garden, you’re forced into surrender, as the collective of sculptures transport you into another world. A world in which, every butterfly swirling through the sky performs only for you, and a bronze David is within reach. A scene scored by a soft symphony of soaring seagulls and the faint rustle perfectly trimmed hedges, amidst a Floridian breeze.

Time is still — albeit nonexistent — and you’re humbly reminded of what you’d lost in the hustle and bustle. You.

It’s evident that every patch of grass, budding rose and marble slab has a home — moreover a purpose — in this eden. Not an expense has been spared, as it stands as a poised symbol of supernaturally serene perfection.

That’s not to say that there has never been a weed in need of pulling, nor a rose in need of pruning. In order for this garden to flourish, it has to be cared for consistently, with great dedication to growth and nourishment of each plant that’s taken root.

Your brain is no different.

Like the garden, your brain has infinite roots that stem from deep within the soil of the soul. It’s the very quality of this soil that dictates how both brain, and rose-bush, will be nourished and thereby flourish.

Your neural pathways are as infinite as the roots beneath the garden. Sometimes, equally as confusing in their configuration. The challenge of navigating tactfully tangled roots of thought, can leave you feeling a bit like Alice, toppling down neurological rabbit holes.

We assume that the transit systems of thought are subject to secrecy — in actuality they’re yours to train. If they go neglected, they become cumbersome, consuming the space. If lovingly, but rigidly, guided they evolve into vindicating vines, decorating the walls of a cognitive garden all your own.

Without the radiant rays showering the garden, the garden would never be gifted an opportunity to grow. It would not savor the sweetness of its sugars, nor photosynthesize into the photogenic phyto-op that it is.

Sunlight is a silent savior for both brains, and plants. Both respond positively to light — physically and metaphysically. It has been shown that the imagery of white light can have healing capabilities on a cellular level. Offering the brain an opportunity to creatively curate neurologically tangible imagery, to an intangible entity. In its own way, the brain photosynthesizes the sunlight.

Sitting in the sun for 10-20 minutes is like a proverbial “power up.” Producing greater levels of Vitamin D, allowing for greater serotonin production, while allowing for a more stable shift into the, reparative and growth oriented, parasympathetic functions of the body.

Your garden is comprised of seeds you personally planted, some you felt the need to tend to, and others have no place in your space, that got thrown in with the mix.

Either way, you nurtured the growth of each and every seed that was thrust into your personal eden. Some grew rapidly into radiant roses, budding and blooming, beautifully. Others woefully grew into weeds.

It’s important to acknowledge that not all weeds are harmful or “bad.” There are some that positively participate with the plants around it, some even donning a daisy or two. While others reach deep into the roots. Sucking away the sustenance from the flourishing and flowering, plants. Either way, it’s a choice.

This is not to say that you will get out of your gardening endeavour sans cuts and scrapes. You may bleed, get bitten by a bug or two. You may suffer a sunburn, while wishing you had tended to the garden sooner.

It’s a choice to take ownership of a garden that has always been yours, weeds and all. It’s a choice to allow it to be as abundantly rich as it deserves to be. Making contact with, and pulling, your weeds is not a one time ordeal. It’s a process that requires patience, and maintenance.

With every weed that’s pulled, room is made for verdant plants to take root. As the lessons are gained, appreciation is given to the weed for serving its purpose. You gain wisdom from your weeds.

Each weed grants you the gift of becoming a greater gardener in the process.

We’ve all had to pull the weeds within our minds. Unfortunately, there isn’t a weed killer or a gardening service that can do it for you. The relationship between you — the being — your brain and the environment in which you allow it to grow, is just that — a relationship.

It cannot be confined to one occurrence or a flawed flour. This relationship requires communication, compassion and companionship just like any other. An ever expanding Eden that is yours to nourish, own, and appreciate, in all of its growth phases and evolutions.

Imagine the most beautiful garden you’ve ever seen then remember that’s what your brain truly is. A garden in need of tending, a lush living entity that cannot evolve without your loving interference. A flourishing, ferocious field of infinite possibility above, and below. Begin by believing in the blissful majesty that is your own mind by, and pulling the weeds one at a time.