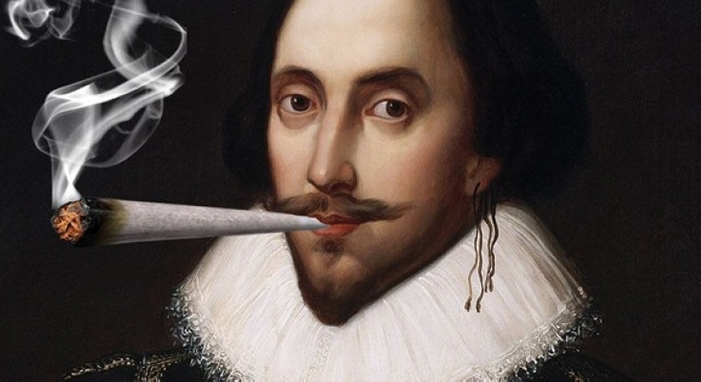 Cannabis, or Marijuana, has had a residencency at the round tables of philosophy, religion, and medicine since 2000 B.C.E.. Long before the socio political revolutions of the counter cultures of the 1960s and 70s, that served as a catalyst of exploration. When both cause, and consciousness, caused a generation to ask questions of a system that prefers silence.

Historians have recorded evidence of clay-cannabis-pipes recovered from Shakespeare’s home at Stratford-Upon-Avon, from the 17th century.

Queen Victoria — yes… the one with the era as her namesake — was prescribed a toke or two, by her private physician when the Queen was cramping during her cycle.

In case the predecessors of western civilization haven’t convinced you, John F. Kennedy also used cannabis, to cope with chronic back pain. The list goes on.

The stoner stereotype can be seen on smokey silver screens around the world. Dazed and Confused, Cheech & Chong, and Dude Where’s My Car, are just a few that come to mind.

Dudes with a cough, chuckle — and an appetite — in erroneous situations that all began when they sparked a dub.

A 2017 World Drug Report, states that, as a result of civilian efforts to legalize cannabis in 2016, four states were added to — the now — 31 total U.S. states that are taking the steps toward normalizing marijuana use. As the science surfaces many “stoners” are saying it’s more than smoke, and psychedelic mirrors.

Medicinal cannabis has since been declared legal in Canada, Belgium, Australia, with consistent prescriptions regulated by physicians in the Netherlands, where Mary Jane was made her modern debut in 2003.

Medicinal effects include relaxation, decreased in inflammation, elevated mood and increased appetite — “the munchies.” Those suffering from severe chronic pain, chemo, or mental crisis can now access cannabis, legally. Chronic conditions, that have been conditioned and speculatively cured, by chronic.

Research is flooding the gates pointing toward not only the physiological, but the psychological superpowers of cannabis; currently a DEA Schedule I drug — substances, or chemicals are defined as drugs with no currently accepted medical use and a high potential for abuse.

Cannabis is a natural herb whose existence predates modern civilization. Within the plant are approximately 483 complex compounds, and about 113 have been identified. The most infamous of them all: Tetrahydrocannabinol, better known as good ol’ THC. Which is the psychoactive component of marijuana.

As the stoner-social-circles would say the possible side effects of cannabis consumption are “hungry, happy, sleepy.” And it’s true, to a degree.

Cannabis is received in the body by membrane bound cannabinoid receptors that are present in all living mammals, and reptiles.

That’s all of us, except insects, who’ve been found to have a natural endocannabinoid system that runs throughout the central, and peripheral nervous system. Controlling nearly all conscious, and subconscious, functions of the body.

In more simplified way, they can be broken down into CB-1 and CB-2 receptors. CB-1 is found largely in the brain. Specifically in the limbic system — otherwise known as the trauma center or reptilian brain — the cerebellum, and in both sex’s reproductive systems.

CB-2 receptors are located in the peripheral nervous system — which includes the gut brain axis — immune system, and is responsible for the anti inflammatory responses elicited by cannabinoids.

A cannabinoid receptor can be found across nearly all essential functions of the human — and non human — anatomy. The endocannabinoid system impacts appetite, pain tolerance, mood and memory.

One of the 113 compounds has taken the international marketplace by storm: Cannabidiol or CBD. An essential component in all cannabis plants, that has evolved into extractions, concentrates and consumer goods for the medicinal market. CBD, some speculate, can decrease the psychoactive effects of THC, while increasing short term memory and it’s used to treat chronic pain, nausea and a myriad of mental health conditions.

CBD is also shown to act as a 5HT1a receptor facilitating the production of neurotransmitter serotonin — which is often the crystal skull for those domineered by dementors.

One company making its own mark on the canna-boom, is Sera Labs spearheaded by fierce business maven, Nancy Dietsch. The venture began with skin care, that challenged claims that CBD wasn’t topically receptive. In trials they found that by adding between 200 to 300 mg of CBD, the dermal layer serves as a “great delivery system,” for cannabinoids.

Dietsch says, that SeraLabs is dedicated to producing “premium products through intelligent science.” Their researchers, and product development team have created products that range of oils, to vegan/kosher gummies, and serums to pet products. To date, the company has sold over $2 million in product, and has raised $5 million dollars in capital.

A self professed “exercise fanatic,” was set back by shotty knees. By incorporating CBD into her regimen Dietsch experienced a significant decrease in inflammation, and thereby greater mobility of her joints.

She believes it’s time we use cannabis for the betterment of overall human health, while providing high quality CBD products to a market that’s quickly being consumed by corporations with the monetary munchies.

On 4.20.19 Netflix will be releasing a documentary called Weed the People that chronicles the stories of 5 young humans who were served with a life threatening diagnosis. SeraLabs is connected directly with one of the little ones, Sophie, who’s incredible journey can be supported here.

The stoner stereotype, and canna-conversation has come a long way in the modern age. As a health coach — Human Builder — it’s encouraging to see the vast majority embrace the compounded power of CBD. For those who haven’t explored cannabis as potential treatment, therapy or supplement, maybe it’s time to look beyond the clouds of smoke; to see just how impactful this compound could be.