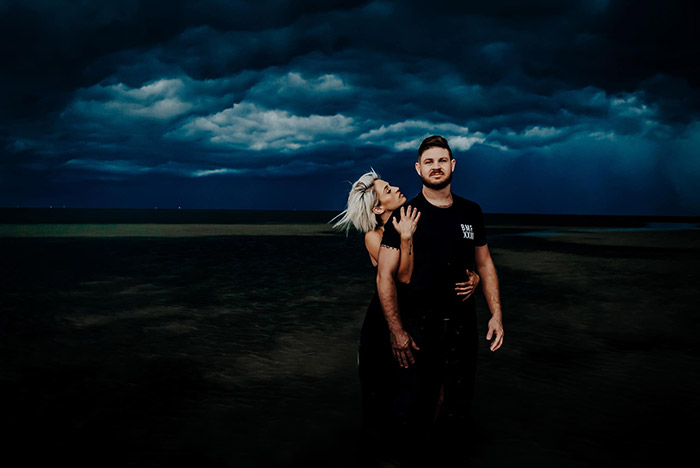 It’s been almost a year since the rumble of Irma’s clouds chased us all the way back to West Coast — as it was the only flight left as the projected Cat. 5 barreled toward our Tampa Bay. Just days before she courted our waters, our ever-inprogress-home crumbled.

Our ceiling had fallen. Yes, the sky had actually fallen. Just narrowly missing myself, and our fur child. When I say fell, I don’t mean in the way Chicken Little would ramble on about.

I mean plummeted. What we thought was going to be a patchable hole, turned into our ceiling (from the front door, to the living room, and the start of the kitchen) incinerating itself from existence.

The drywall, and — what looked like cotton candy — insulation,  smashed with a thud. I look up to see Trevor’s foot hanging through the wall like a bad Nickelodeon cartoon.

Naturally, in fear I yelled “What the fck Babe!?” Not that it was his fault, all I saw was a defeated foot, retreat into the ceiling.

He bought our home just a few months before we met, and it’s been our work in progress since our journey began in August of 2015. I didn’t realize it then, but something had just rattled our little world. A world he and his family gutted, and remodeled, in hopes of this being a nest egg. A foundation for a life neither one of us thought we would ever have.

In a lot of ways, this home has evolved with us. Through every stage of our relationship it has earned a proverbial brownie patch. Be it, cabinets — of which we braved IKEA for on my first trip to Florida, appliances — just before I moved in, and the countertops — the tangible proof of this relationship’s ram-like strength. In the beginning, there wasn’t much. It was brand new. The walls were bare, the living room was empty, and the bedroom was simple.

The kitchen served as an open area for pineapple / ricotta pizza consumption. Where he would lay in my lap, as we sipped on hard-root beer that we knew was too sweet and didn’t care.

Five months of coast to coast long distance forced us to weather a storm all our own. On New Years Eve of 2015, we kicked off a new year, new chapter, and a new life.

We’ve been through alot, and so has this home, and when I looked at the crumbling mess in our doorway, my heart couldn’t help but break. “Not again, please just not again.”

Much like a relationship, a remodel takes time, patience, dedication, consistency, and love. A kind of love that can see through the work in progress. The everpresent kind that can withstand even the most damaging of thunderstorms.

This new debacle sent us to live on an air mattress in his mom’s living room. While, everyday, Trevor and his mom were up in the 120 degree attic repairing  our home’s more recent hissy-fit.

Honestly, I kind of loved being in close quarters there for a while. It was nice. To be with family, to be forced to snuggle — the situation could have been worse.

When the reality of the imminent storm settled in, I felt my dementor’s ears perk up. My heart stopped and time froze. We could lose everything. Not just the physical possessions, but the one thing that we have truly made together. Our home that we’d built, the lawn that we’d laid our selves — gone.

Finally I had a place to call home, a place that I wasn’t running from — a life I was proud to live. In waltzes Mother-Natche to teach me a thing or two.

At this time, the dementors were loud, determined, and ruthless. I thought I had a decent grasp on them, but no matter how tightly bound their collars, they found a way to break free. Trevor had just picked up meditation, and insisted that it would cure — what I believed to be — the incurable. I could feel his fatigue of their presence and persistence. To the point where there was a choice: eternal darkness, or the even slightest glimmer of light.

I had never been through a hurricane, only a brief/abrupt earthquake in Sherman Oaks. It was the first storm in my life I could anticipate. The one that I could observe, strategize, and study.

I called my best friend. We had been in contact more in that week than we had since the move. She’s been there through all of my storms, including the ones I would much rather not relive. Our love is that of blood sisters, and our list of battles fought side by side is longer than I care to count.

A text comes through, “Have you heard the song Thunder by Imagine Dragons? It’s your Hurricane song…olive juice (translation: ‘love you’),  J.”

I hadn’t — but it felt safe. Something about the raw authenticity and ruthless rumble of the drum, sent the dementors on their merry way. A song, by a band I had never followed, showed me that I had that power to deny darkness access to my life.

We wound up evacuating, packing up valuables, filling up gallons of gas, and saying goodbye. I drove us overnight to Jacksonville, where we “slept” in my Toyota Corolla — myself, Trevor, his mom, and our little bubba. I couldn’t sleep.

I had never been more awake. Focus, familial love, and fearlessness, froze the dementors in their tracks. It was like looking at them through bulletproof glass. For the first time, I was impenetrable.

It was 3 am — in the middle of the JAX cell phone lot — and Kira needed to pee. The sky a deep dementor-blue, illuminated only by flickering light poles. It was silent. No honking, thunder, wind, or whining, just silence. It was beautiful.

In that early morning moment, I was reminded of what mattered.

It wasn’t my fears, inhibitions, nor my possessions. The only thing that mattered was us. When told to start packing, I just threw a bunch of clean clothes in a bag and went. None of it mattered. I made sure to pack my valuables, the man I love and the unbreakable life we’ve fostered.

Throughout the Hurricane — and moving back into our home — I would occasionally play Thunder to remind myself of battles we’d fought during Irma’s reign. To remind us that no matter how intimidating the rumble of the storm, we could whether it together. Though its melodic structure was symbolically soothing, I had never really heard to the lyrics. Not until another storm crossed this journey’s ever-evolving-path.

This storm was intimately introspective, and subsequently, inexplicable. It was 5 a.m., and I was woken up by thunder that roared with more ferocity than should face an early morning.

A good old fashioned Florida rumble, that awoke me before my alarm. Then a crash. My heart stopped synonymously with the strike of lightning, many mississippi seconds away. This day was different.

Not sure why, I simply knew something had shifted within me. I took a new route to work, and a ride that was normally serene in its silence, was infiltrated by Imagine Dragons once again.

This time, I heard, felt, empathized with every syllable, as they shot bullets through my soul. For the first time I felt my own power, like that of lightning as the predecessor of thunder.

Its powerful, even strikingly beautiful. Lightning is only seen, judged, observed. Thunder is felt. Thunder rattles the earth, echoing the electromagnetic impact. Thunder does what nature has intended her to do, cause a rumble.

Regardless of the storm you are weathering, or what others might think / do / say, be thunder. Recognize the power within you, and once it’s in your grasp, do not hold back. Release your rumble and roar — bellow like that of a dark storm — and let them feel your thunder.